The June 2018 version of SBA Composer has just been released.

You can now use the button "Import file from my computer" to load the following file types:

We are working on supporting neuron morphology files in SWC and Neurolucida formats, and will also enable saving of (re-oriented) volumes as NIfTI files.

If you encounter files of supported types that cannot be loaded, please submit them through feedback@scalablebrainatlas.org.

If you load volumetric data into SBA Composer, you can simultaneously display three section planes named coronal, saggital and horizontal. These names just refer to their initial positioning. Via the 'hamburger menu' of each section plane, you can change its orientation to arbitrary angles.

If you search for brain regions in the left panel, for example for SS1, the selected region gets  highlighted yellow in the brain region tree. Its parent regions will also be shown, with a +/- sign on the left. Press + to show all children of the parent region, press - to collapse the tree. 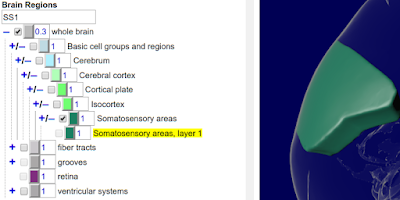 A new and much wanted feature is that you can click in the 3D panel on any non-transparent structure to reveal the name of the brain region at that location. The name will appear in the box below the 3D panel as a clickable link that you can use to display the region in 3D. This feature will be further enhanced in the next release by introducing a data cursor. 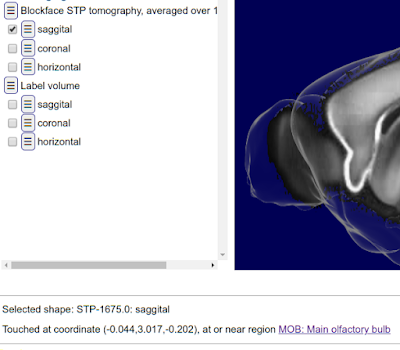 On the output side, the 'Save scene as...' button now lets you make screenshots of the 3D panel at inflated resolutions up to 400%. More options for saving and sharing are planned for the next release, it should become really easy to share complex scenes with colleagues. In the FAQ section you find some preliminary examples of an API. For example, this direct link shows soma locations of 302 neurons of the MouseLight project.
- May 31, 2018

SBA-Composer is a new addition to the Scalable Brain Atlas platform. It provides a 3d graphics powered environment in which you can compos...